As many of you know, earlier this year the FCC issued new regulations which drastically restricted the legal out-of-band emission (OOBE) limits in the U-NII-1 and U-NII-3 spectrum bands. In June, Mimosa submitted its Petition to the FCC, urging them to revise the OOBE limits via an effective compromise proposal. Today we submitted additional comments to further underscore our position. Despite the fact that the 5 GHz band is one of the few bands capable of supporting long distance Wi-Fi connections, the power limits and antenna sizes that are required for the optimal use of those links are illegal under the current FCC limits. In addition, the new rules prohibit the use of the entire band for transmission, and instead require radios to avoid the edges of the band, severely limiting the amount of spectrum available for use. If the FCC does not act decisively to change the current OOBE limits, Mimosa believes that the regulations will jeopardize the ability of wireless Internet providers to reach underserved communities with reliable Internet access.

Why Did the FCC Change the Rules?

The FCC’s regulations governing the outdoor use of the 5 GHz spectrum have a complex history. Throughout the 1980s and 1990s, both Part 15.407 (in the 5250-5350 and 5470-5725 bands) and Part 15.247 (in the 5725-5850 band) governed the spectrum limitations for point-to-point operations in 5 GHz. Manufacturers of outdoor equipment filed for equipment certification under both regulations, taking advantage of higher antenna gain from Part 15.247 along with broader spectrum from Part 15.407.

Eventually, concerns about Terminal Doppler Weather Radar (TDWR) interference prompted an FCC investigation which ultimately resulted in the disallowance of the TDWR band and unification of the competing 5 GHz regulations in May of this year. Attempting to balance the needs of all constituencies, the new regulation adds 100 MHz of new outdoor spectrum (5150-5250 MHz), allowing 53 dBm EIRP for point-to-point links. At the same time, however, it disqualifies Part 15.247 and imposes the stringent emissions requirement of 15.407 ostensibly in order to avoid interference with radar.

What Is the Effect of the New Rules on the Wireless Industry?

While we applaud the FCC’s attempt to simplify its regulations and to open more outdoor spectrum, Mimosa – along with WISPA and a number of other wireless equipment vendors – believes that the FCC’s current OOBE limits will destroy the usefulness of high gain point-to-point antennas throughout the industry. As such, the regulations are clearly counter-productive to the FCC’s stated mission of increasing the reach of broadband in the United States.

The fundamental issue with the new regulations is that the FCC’s -27 dBm/MHZ EIRP requirement suggests that regardless of antenna gain, all devices must have an absolute limit on radiated emissions, regardless of the directionality of those emissions. This absolute limit unfairly penalizes high gain systems that focus all their energy in a narrow volume in space, and instead encourages devices to spread interfering energy in all directions equally.

The practical implication is dramatic: a 15 dB reduction in gain translates to a 6x reduction in range, severely affecting the ability of Internet service providers to reach underserved areas. This result is obviously counter to the FCC’s original intent.

What is Mimosa’s Solution?

Mimosa proposes a compromise-driven alternative in which the OOBE requirements are proportionally scaled in relation to antenna gain. Since high gain systems naturally radiate in one specific direction, it is ultimately unfair to include the intended directional radiation in a calculation meant to reduce out-of-band interference. Specifically, we recommend increasing the -27 dBm/MHz limit for systems with antenna gain higher than 6 dBi, by the amount by which the antenna gain exceeds 6 dBi. Scaling the power limit relative to a 6 dBi antenna is common across Part 15.407 and ensures fairness among radios, regardless of the antenna used. At the same time, our technical analysis demonstrates that a well-designed high gain antenna can operate effectively at power limits significantly higher than those currently allowed, while still preventing unwanted interference.

The illustration below shows a 25 dBi high gain antenna (the dotted line approximates the antenna radiation pattern) in a point-to-point link, transmitting 30 dBm of conducted output power. This link meets the FCC’s Part 15.247 U-NII-3 requirements for conducted power and antenna gain. Applying Mimosa’s proposed emissions requirements, the transmitter could radiate up to -8 dBm/MHz EIRP of emissions within the main beam of the antenna, but in a very narrow volume of space directed only towards its link partner. The off-axis emissions from this transmitter would be much lower than -8 dBm/MHz EIRP. Assuming a nominal 30 dB side lobe rejection, this system would radiate only -38 dBm/MHz EIRP emissions to any nearby 5 GHz system, shown in the illustration as a potential TDWR site. Thus, the risk of interference under Mimosa’s proposal would be even lower than that emitted from an omnidirectional radiator complying with the current -27 dBm/MHz EIRP limit. 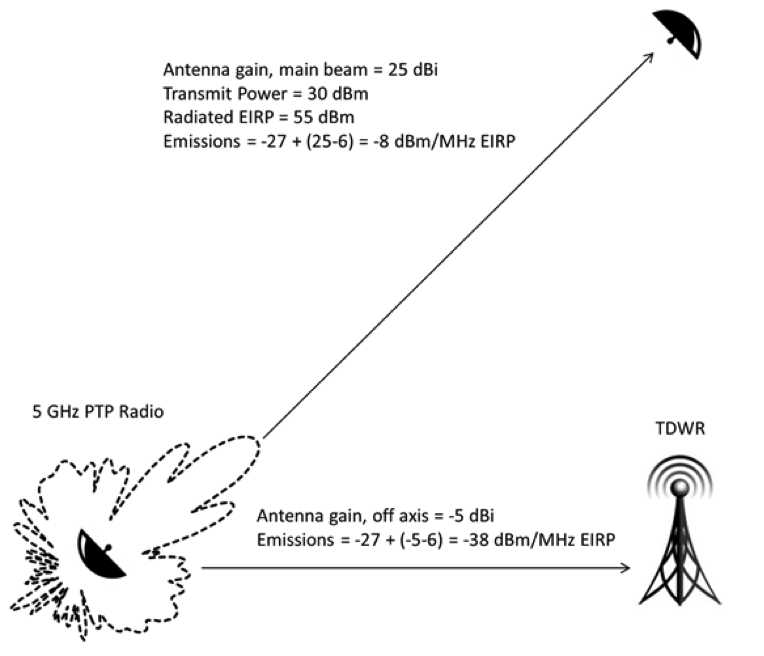 We believe this solution to be a narrowly-tailored technical compromise that meets the needs of all the industry stakeholders. We acknowledge the FCC’s need to better police any potential interference with TDWR systems. At the same time, we believe that our solution meets that requirement, while still maximizing spectrum use.

With the close of the comment period, the FCC now has the decision to either amend the current rules or continue to enforce them without changes. If the FCC chooses not to amend the OOBE limits in the 5 GHz spectrum, we will consider it a grave mistake, but we will continue to develop new product offerings and to advocate strongly for the opening of the 10 GHz spectrum for broadband use as a useful alternative to the 5 GHz band. Recognizing the pressing need to maximize all available spectrum, however, Mimosa is hopeful that the FCC will act quickly to amend the recent 5 GHz rules and ensure the availability of the Internet throughout the entire United States.