Mimosa products are powered using Power over Ethernet (PoE), making it easy to install Mimosa radios with a single high quality CAT 6 Ethernet cable for powering and connectivity. To give you the flexibility to choose the right powering solution for your application, we strongly believe in taking a standards-based approach to interfaces. This was a key factor in selecting 802.3at, 48 volt as the standard for powering Mimosa products.

This Tech Tuesday post will cover the Mimosa-provided PoE and the PoE specification to which our products are built, to help you make an informed decision on which option is best for you.

First, let’s review the definition of some frequently used terms:

The PSE is also commonly referred to as a power supply and provides power over an Ethernet cable. A PSE can either simply act as a midspan injector providing power to a single device, like most basic power supplies, or Ethernet switch/routers with integrated PoE that can also inject power in addition to their networking features. Mimosa provided power supplies are midspan injector-type and include ESD protection up to 9kV, thanks to the use of gas discharge tubes which are able to withstand multiple over voltage events, without passing that voltage onto the connected equipment. 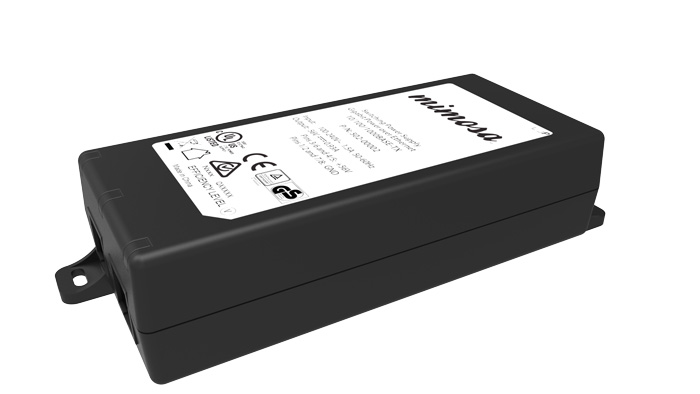 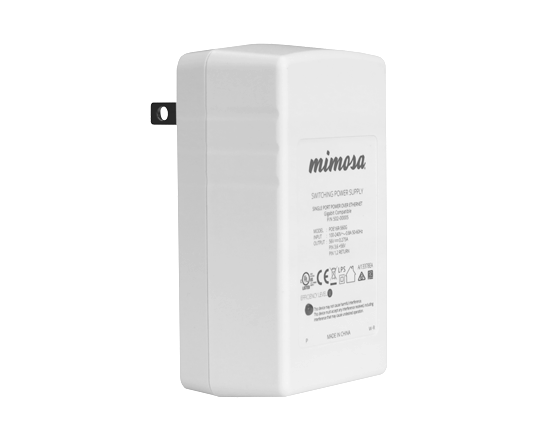 Third party PoE powering options are available, including DC PSE that are more suitable for solar/battery installations, or switch/routers with integrated PoE and data that can be used to power multiple devices.

The PD is a device that receives power from a PoE PSE. In Mimosa’s case, this would be our radio products. The PD always has its own unique technical specifications for power input allowed, and specifications also state if active or passive PoE modes are supported. The PD device specifications typically are different from even the PSE provided in the same box, so if you are interested in using alternate power supply options, it’s critical that you clearly understand the input requirements for the PD.

In an active PoE scenario, the PoE PSE and the PD negotiate before any power is supplied to the device. This is covered by the 802.3af/at standard, which is designed to protect equipment from being damaged by it being powered with the wrong power level. An active PoE supply is looking for signature levels of resistance from the device being powered to understand what voltage to supply, or if a device is requiring PoE at all.

Mimosa’s PoE Output specifications can be found here: http://backhaul.help.mimosa.co/backhaul-faq-voltage-input-specifications. It is important to not be confused by some of the Mimosa PoEs outputting 56 volts - this is not because Mimosa radios require 56 volts, but rather it is to provide overhead to account for voltage drops on longer Ethernet cable runs.

This is a must read for those who want to power Mimosa products with third party PoE power supplies. Mimosa devices are for the most part 802.3at compliant, meaning that provided the PoE power supply is either an active PoE that complies with 802.3at, or a passive PoE that has output characteristics within the ranges defined by 802.3at, the device will power up and be usable. The B5-Lite radio and C5 client device are passive in nature, meaning that when paired with an active PoE PSE, they will not reliably provide the signature resistance required by the specification to signal ability to accept power.

Mimosa devices can accept a wide range of input voltages. The products will operate with an input voltage of between 44 to 57 volts. Mimosa is also agnostic to polarity, meaning either positive or negative can be input without impact.

At Mimosa, we own and use a representative sample of the third party equipment that we know our users deploy, but as there are many options available, sometimes incompatibilities will be found. We occasionally see issues with the switches used in conjunction with a PoE power supply, for example, certain older versions of firmware on a commonly used switch did not reliably negotiate at 1000 Base-T with Mimosa radios when used with the Mimosa PoE power supply. If you are seeing issues, please contact our support team, as we may already have the equipment available and can attempt to replicate the issue. We continue to make tweaks to our own firmware to ensure the broadest compatibility possible, so be sure to update to the latest version of firmware, for both Mimosa and your switch, before testing

What if I’m not sure if a third party PoE will work with Mimosa?

For any questions about whether a third party PoE will work with Mimosa products, please chat to our support team and provide details of where we can find the PoE power supply data sheet. They will be able to advise whether the PoE you plan on using is within our specifications.

While recognizing that there are a variety of options for PoE power supplies in the market, Mimosa still strongly recommends the use of a Mimosa PoE power supply. The major benefit to using Mimosa’s B5/B5c/A5 power supply, is the inclusion of built in ESD protection up to 9kV, something not readily available in third party supplies.