The City of McDonough wanted to upgrade their network infrastructure. Key goals were to provide a redundancy network, offer free Wi-Fi to visitors and improve Public Safety

The city deployed Mimosa B5 and B11 backhaul radios

The city saw increased speeds and added new services as a result. The new network is so reliable they have been able to cancel some leased fiber lines

Located just 30 minutes south of Atlanta and Hartsfield-Jackson International Airport, the City of McDonough is home to just over 23,000 residents. While maintaining its southern charm, the city is a thriving, picturesque community that is the center for activities, art, and commerce for Henry County and the southern arc of Metro Atlanta. McDonough possesses all the charm of a small southern town, with locals calling it a great place to live, work, and play. And now, it is able to claim it offers state-of-the-art broadband technology.

In 2014, the Mayor and City Council of the City of McDonough had a vision of bringing free Wi-Fi to the downtown area and four local parks. Steve Sikes, Director of Technology Services at the city, and SmartWave Technologies, a leading systems integrator specializing in Smart Cities, together evaluated various deployment options to determine the most efficient and cost effective way to get internet access to the city. “At the time, I was also looking at foundationally rebuilding the city’s network infrastructure to provide an ongoing return on investment and expansion capabilities,” said Mr. Sikes. “SmartWave suggested a hybrid fiber-wireless network that would not only allow us to offer Wi-Fi access but would revitalize our infrastructure, cut ongoing costs and importantly, gain a backup network in the event of any disaster scenarios. It was a perfect fit for the City!”

According to Sikes, the new network was immediately hailed as a success and a positive step for the city, supporting the Mayor’s and Council’s goal to attract young professionals to the area with the promise of free CityLink Wi-Fi in these public areas. With the extra bandwidth capacity, the city has also been able to expand services - at the city’s annual Geranium Festival, the number of devices able to connect downtown multiplied from an average of just 60 to over 2,000 devices. Over 450 users were connected to the downtown Wi-Fi at the high point of the festivities. 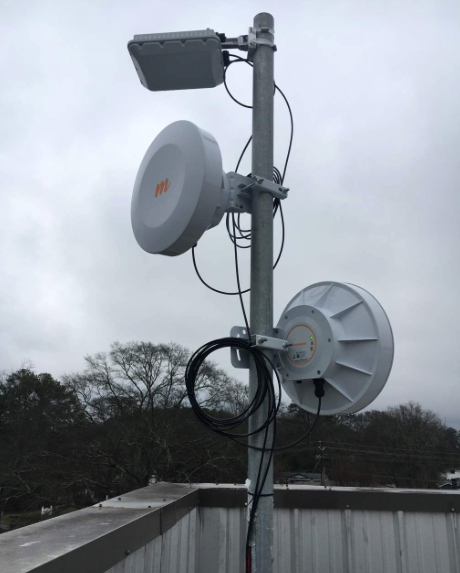 Sikes was also able to increase bandwidth speeds and add new services at the newly connected city offices previously using low-speed connectivity solutions like Ethernet over Cable. Offices are now able to run multiple IP phones, computers, and networked printers without a glitch. “The Mimosa network has been rock solid,” said Sikes. In fact, the Mimosa solution is performing so well, Sikes is evaluating canceling leased line connectivity at certain offices to save additional city funds. “Most importantly,” said Sikes, “the B11 licensed ring provides redundancy and disaster recovery options for city-wide operations, ensuring connectivity if our fiber network goes down. All primary city buildings including City Hall, Public Safety, Municipal Court, and Public Works, have the B11 ring as a disaster recovery option.

A Push into Public Safety

The city is in the process of deploying high-definition IP security cameras at the Square and adjacent parks. The cameras will capture real-time video to provide improved public safety and help solve any crimes that may occur. Connected to Power over Ethernet ports on the Wi-Fi access points, the data will be streamed to the city data center using the high-capacity Mimosa B11 and B5 links. Moving forward, the city is looking at ways to further reduce costs. They have to plans add a B5 link to the Water Plant and across to the Waste Water facility, which will save $800/month by eliminating leased fiber. The city is also evaluating extending the microwave backhaul and Wi-Fi network across Interstate 75 to the city’s Avalon Park & Fire Station 52. Using Mimosa backhaul to that area will allow the city to save an additional $550 per month.

“We are very happy with our new Mimosa network”

“We are very happy with our new Mimosa network,” said Sikes. “SmartWave provided a great plan for deployment, set realistic expectations and had the network up and running very quickly. This project delivered reduced costs, added specific disaster recovery pathways and a more robust infrastructure that allows us to offer new services in the future.”