Duncan Regional Hospital is an innovative, leading hospital in Oklahoma

An economical and high-speed backhaul solution to connect clinics

Duncan was able to reduce costs dramatically without sacrificing performance

With a reputation as one of the premiere hospitals in Oklahoma for medical excellence, advanced facilities, and high levels of patient satisfaction, Duncan Regional Hospital in southwest Oklahoma is a 138-bed nationally-accredited hospital. Regularly appearing on Healthcare’s “Most Wired” hospital list for innovation and use of technology to improve efficiency, the Hospital has been taking care of Stephens County citizens since 1977 and employs over 900 staff.

As part of ongoing technology improvements, the hospital was looking for a reliable and economical way to connect new buildings to offer wireless services as well as provide a high-speed wireless bridge between buildings at one of their offsite clinics. And a key goal was to take back control and management of their network by removing the middle man from the provisioning of network services. They considered two viable alternatives – namely, digging a trench and running fiber, or installing a wireless link. Although the two alternatives required essentially the same time to implement, they knew that costs for fiber installation could escalate quickly. 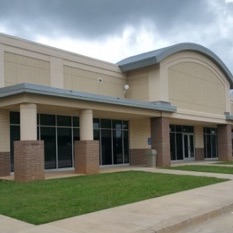 “In researching backhaul options, we discovered Mimosa’s gigabit backhaul radios”, said Bryan Tetlow, Network Analyst at Duncan Regional Hospital. “We realized that not only did Mimosa have great management products and superior support that would fit our needs very well, but our research verified they had met others’ challenges, performing well in potentially very complex installations.” Tetlow also noted that in addition to being robust and reliable, the Mimosa solutions were great in terms of price-to-performance value.

The hospital ultimately decided to deploy Mimosa B5 backhaul radios and Mimosa B5-lite backhaul radios, installing two links of each on 5 GHz UNII bands. Deployment took about three weeks for each site from initial survey to completed installation. Mimosa surpasses the hospital’s previous experiences with older technology vendors, and they were delighted to see the outstanding performance of Mimosa backhaul radios in unlicensed bands, while remaining cost effective.

“This was the easiest and quickest backhaul installation I have ever done!”

Tetlow and his team handled the installation themselves and found the overall process to be very simple. “Previously, if someone said you can have a wireless link up the same day, you wouldn’t take them seriously! This was the easiest and quickest backhaul installation I had ever done, and I’ve been working with a variety of wireless technologies for some 20 years,” said Tetlow.

The installations were within line of site of one another, so Tetlow was able to get the initial alignment to link using Mimosa’s Auto-Everything feature, and then fine-tune the spectrum from there. And in the spirit of keeping control of their network, Duncan Regional Hospital signed up for Mimosa Cloud+ management, giving them a view into their network at all times to monitor interference and environmental fluctuations, and the ability to plan for future growth.

In addition to ease of installation and cost considerations, integration of the new equipment was important to the hospital. As Tetlow explained, “Standards mean everything when you have a large enterprise infrastructure. Mimosa made my job easy. Their solution fit well with our needs - actually far better than we could have expected - and the solution didn’t make us change our network scheme for a one-off solution.“

Looking ahead, the hospital has another nine projects on the board for Mimosa solutions - items they had not been able to address previously without a cost-effective solution available. Two of the planned links will be long range links of over 25 miles, with the remaining links deployed within several miles of the hospital.

“I would recommend Mimosa for backhaul solutions without a second thought.”

Said Tetlow, “We were able to save substantially in the costs involved with connecting our new student nursing housing to the main campus network and didn’t cut any performance or reliability in the process. I would recommend Mimosa for backhaul solutions without a second thought.”

With Mimosa Dual Link technology, the Mimosa B5 backhaul radio can operate on two separate channels, each up to 80 MHz in size. As the channels don’t have to be contiguous, it is easier to tap into more bandwidth even in crowded unlicensed spectrum. In addition to the large throughput achieved with Dual Link, the resiliency provided allows the radio to continue to operate if one channel is impaired by an interference event, a necessary feature for reliable operation in unlicensed spectrum. Dual Link also enables hitless channel changing, avoiding service disruptions during interference events or manual configuration changes. The Mimosa radios also have Auto Everything technology which improves performance in the presence of interference.