“We have the same growing pains that every other WISP has,” said Bill. “The balance between cost and reliability, distance and throughput, performance, etc. Our network backbone or backhaul is the bit that joins all the small bits together. Just like a spine. Just as critical.”

In January 2015, Marykirk decided to upgrade their backhaul and took delivery of the first three pairs of Mimosa B5 devices. Within days they were up and working and according to Bill, have not given serious bother in the 11 or so months since. The B5 radios reliably transport in excess of 800 Mbps, and Marykirk now has four pairs linking some of their largest transmission sites. “When Patrick at our reseller, MS Distribution, called and told me about the Mimosa B5-Lite - a smaller, cheaper brother of the B5 but still capable of shifting 500 Mbps or more - I immediately ordered six pairs,” said Bill. “Oh, I can’t praise MS Distribution enough. Without their support, we would have long folded. Good guys!” Marykirk took delivery of the first pair of B5-Lites in late August. “Nice little devices,” said Bill. “Physically much smaller and lighter than the units they will ultimately replace.”

“This little Mimosa B5-Lite link is the link that just keeps on working, day in, day out. It’s only really got 20db of SNR - the noise floor isn’t the usual -100db we see on empty air – it’s in a quite busy area. And we’re using (at this point in time) a whopping 0.9% of the link capacity.”

In Marykirk’s installation, the B5’s have a maximum usable range of about 10 miles, and they expect that the B5-Lites will be around 5 miles or so. A future expansion plan could include getting connectorised B5’s that bolt onto the back of dishes and can go right up to 5 feet in diameter in order to to transmit 50 miles.

Bill Buchan was very interested to discover that the B5’s have GPS built right in. They use the GPS timing signal to predict exactly when the transmission packet will end - and give far better timing resolutions to the signals in general. This works because both ends have access to the same clock which has a resolution measured in millionths of a second.

The Mimosa B5-Lite links are very stable, according to Bill. They have measured between 299 Mbps and 301 Mbps of actual transmission performance and have been stable for weeks on end. 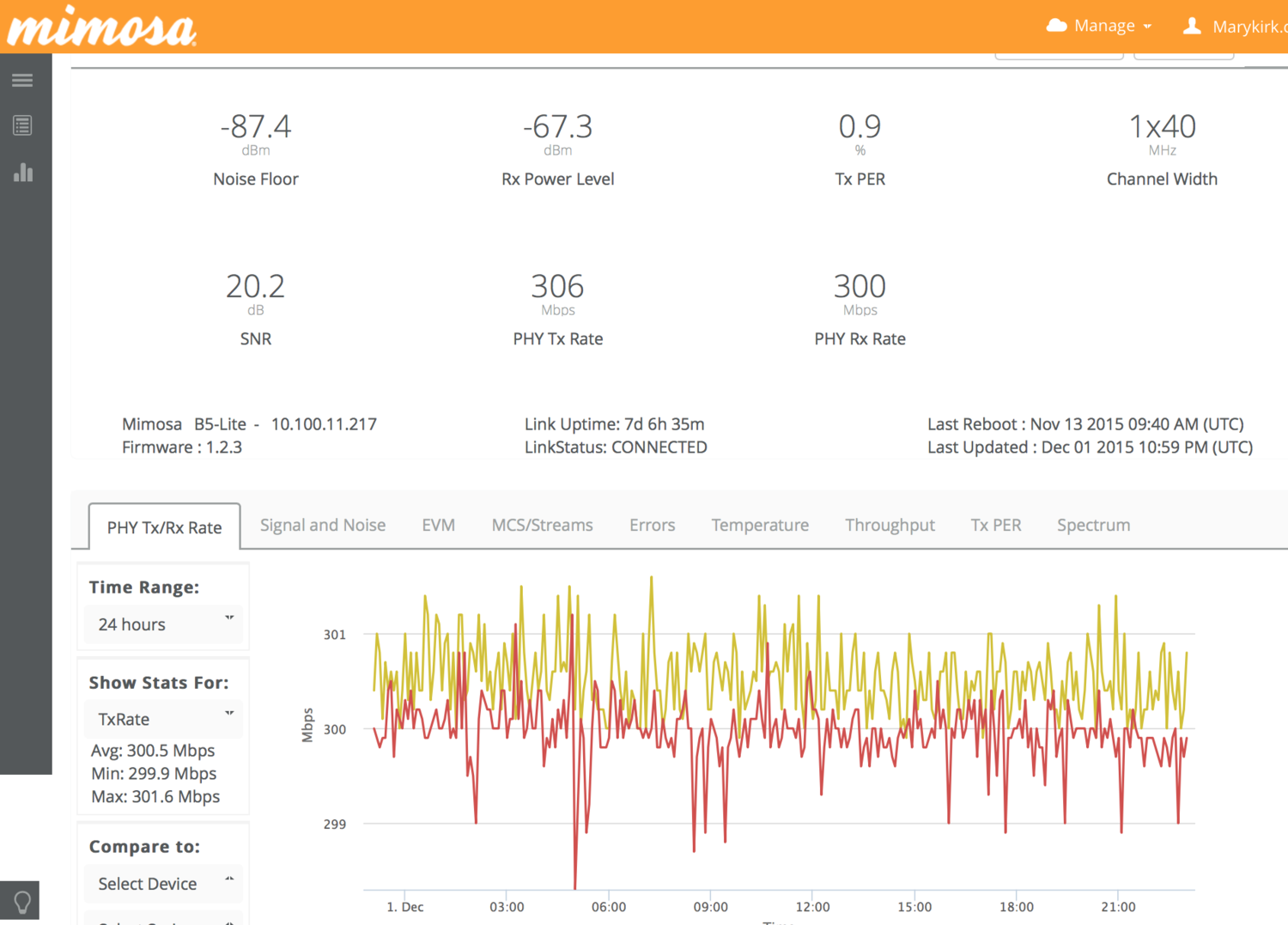 Bill is excited to grow his network with additional radios to meet demand. He’s also signed up for the new Cloud+ service which provides up to six months of historical data about his network and offers instant notifications if there is an issue. As weather is a big factor in Scotland, Bill was excited to see that the B5’s come with outdoor IP67 rating, extended temperature operation and fully-integrated lightning ESD protection. When designing his network, Bill also took advantage of the Mimosa design tool which has expected weather values including rain, temperature, pressure and humidity. “The B5 is ultra tough, and can deal with our very wet and cold weather – and that’s just in summer,” said Bill.

Marykirk.com has taken its network to the next level. Let Mimosa do the same for your company. The next generation of broadband is here. Contact us for the latest and availability in Mimosa products.