Shelby Broadband, a leading Internet Service Provider and facilities-based CLEC covering the Bluegrass Region of Kentucky, today serves over 3500 subscribers. Shelby is known for its robust customer service and vast technical expertise. Shelby Broadband has been awarded “Operator of the Year” by the membership of the Wireless Internet Service Provider’s Association (WISPA).

“Until Mimosa, I don’t know that I’ve had any other 5 GHz GPS that has worked just as advertised.”

A more stable network for Shelbyville 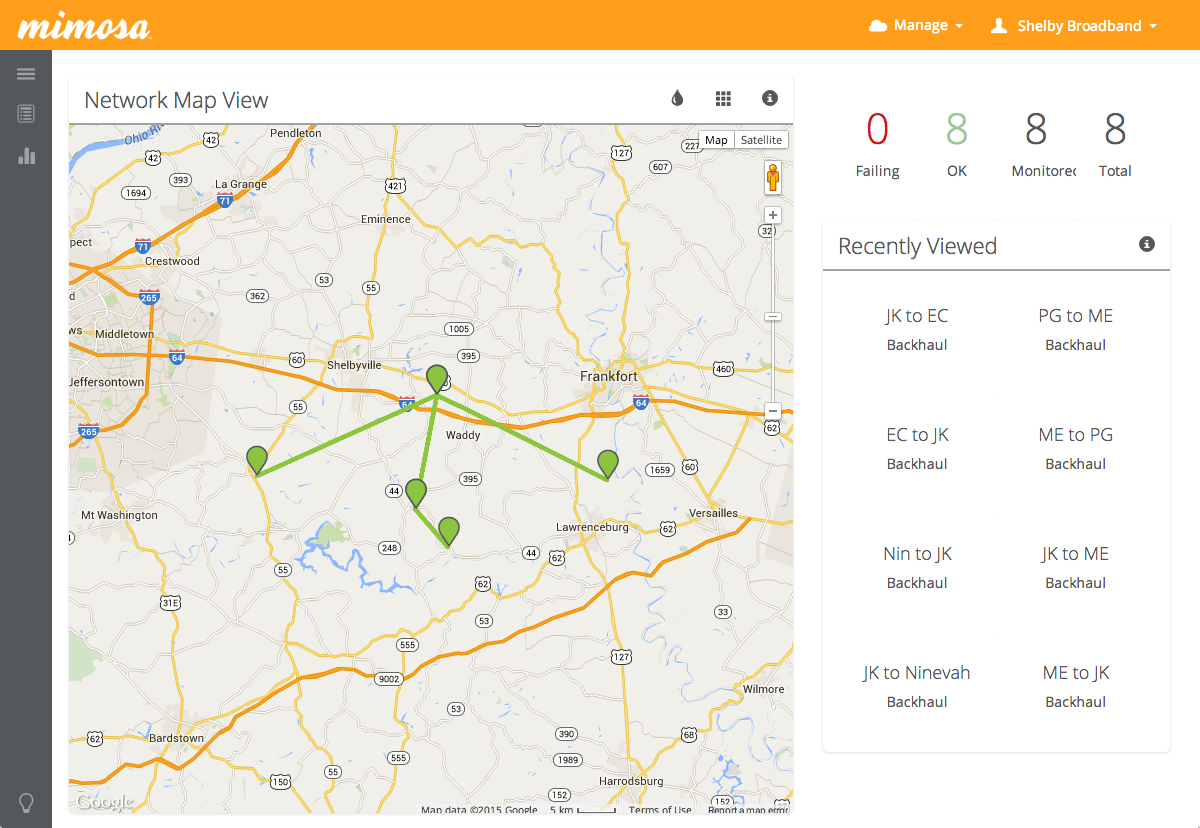 DJ Anderson, Operations Manager of Shelby Broadband, says, “This [equipment] is some of the easiest gear I have ever worked with. It comes with absolutely everything you need, like someone took the time to think about every piece necessary for the installation before shipping the product.”

After moving from Mikrotik to Mimosa B5s, Shelby gained the ability to GPS-synchronize the backhaul radios. The previous radios had to be vertically separated 10-15 feet apart and could not be collocated on frequencies that were close to one another. This constraint caused a problem in the Shelbyville area where there are currently 12 different 5 GHz radios operating on a single tower.

Collocation of the backhauls caused an immediate improvement in the network. Latency went from 100 ms during peak hours to around 6 ms, or 3 ms each way, with the Mimosa B5 radios. Shelby experienced absolutely no stability issues on any of the links.

Anderson states, “Until Mimosa, I don’t know that I’ve used any other 5 GHz GPS that has worked just as advertised”.

Anderson said, “After the installation, I experienced excellent support working together with Mimosa on my network configuration. Just being able to call someone that knows the system inside and out, that is the big difference with Mimosa.”

Anderson says that Shelby plans to continue exploring Mimosa’s Auto Everything mode. “We are especially excited about the fact that you can install three radios, and the radios select the best channels for themselves. I haven’t found another product that automatically selects frequencies in this way.”

Shelby Broadband is taking its network to the next level. Let Mimosa do the same for your company. The next generation of broadband is here. Contact us for the latest and availability in Mimosa’s backhaul products.