Tasked with guaranteeing reliable, high-speed wireless internet coverage for an outdoor event covering 125,000 square feet and 15,000 users is no small feat. Add to the mix the presence of President Barack Obama delivering Commencement at the prestigious Howard University along with the press and Secret Service that accompany POTUS, and a successful installation became of utmost importance to Slice Wireless Solutions.

Headquartered in Midtown Manhattan in New York, Slice has been providing wired and wireless network services for over two decades. Some of their clients include the Jacob Javits Convention Center and large public WiFi networks in NYC. A key area of focus for the company is providing internet connectivity services for Events in areas where 3G or 4G coverage is unreliable.

Slice likes to view a WiFi network installation as a game of chess, where high quality connectivity can be sacrificed without proper planning, strategy and expertise. They view their wireless engineers as chess grandmasters, predicting possible challenges and outcomes and planning networks to be effective in the present and future.

“We were impressed with how rapid and simple the installation process was.”

To address the huge predicted surge in mobile traffic at the Howard University Commencement installation, Slice selected Mimosa backhaul radios based on the recommendation of one of their top clients. With such a large deployment area and the possibility of inclement weather, running Ethernet cable was simply not an option. Slice decided to deploy Mimosa B5 and B5-Lite backhaul radios in conjunction with a mesh network of access points. They unpacked the backhaul radios at their headquarters and ran a few tests to become skilled at positioning. After a site survey of the event area at Howard to evaluate the interference environment and range limitations, Slice sent two technicians to the venue to start the setup process.

“In addition to the ease of use, we were excited to see the incredible capacity of the Mimosa backhaul radios”

Slice relied on the Mimosa Cloud+ design tool to plan and plot the links to find the optimal setup. The tool also gave recommendations for the correct positioning of the radios. 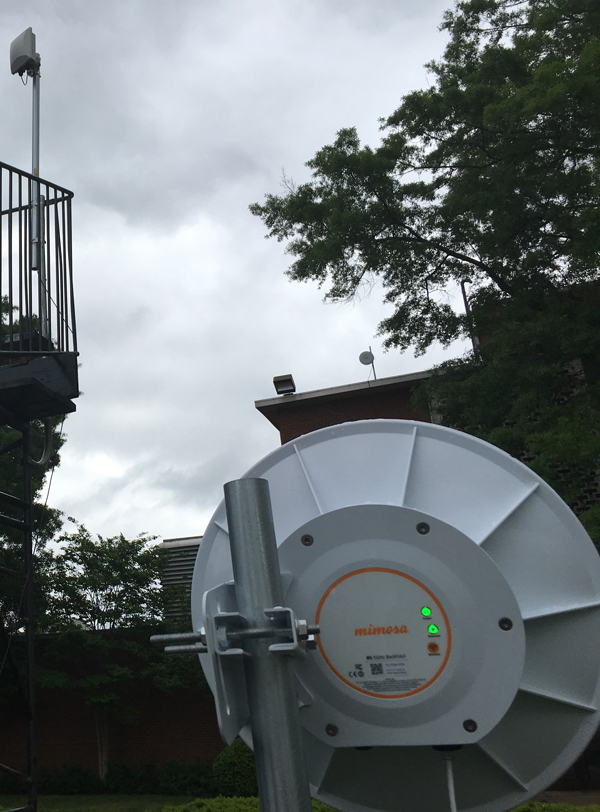 “We were impressed with how rapid and simple the installation process was,” said Alex Yakubov, Director of Operations and Venues at Slice. “The entire process was flawless.”

The B5 and B5-Lite backhaul radios both operate on unlicensed 5 GHz Spectrum and are perfectly suited for short range applications. With the B5 backhaul radio’s unique multi-channel and auto-everything technology, links are protected even in times of high interference, vital for the Howard University Commencement event. With 100% uptime, the network supported downlink speeds of up to 170 Mbps and uplink speeds of over 100 Mbps during the peak traffic times.

“In addition to the ease of use, we were excited to see the incredible capacity of the Mimosa backhaul radios,” said Alex. Slice typically runs the WiFi networks for 40 to 50 large events per year, including the Clinton Global Initiative and New York Fashion Week. “We will definitely use Mimosa again for our large events.”

Up next for Slice – their engineers are planning a temporary wireless backhaul network with Mimosa radios for the Brooklyn Music Festival. Beards, banjos, beers and Real. Big. Wireless.