“One of our locations already had the antennas in place, and we were able to just drop in the Mimosa radio. Watching the link go from 70 Mbps download to 650 Mbps download with just a hardware change was amazing.”

However, as their customer base grew, more bandwidth was required. Says Anthony Hopp, Co-Founder of Springnet1, “We are upgrading from WiMAX to LTE and did not want backhauls to be the limiting factor in how much we can provide to subscribers. We had heard about your PtMP and at the time, we were considering a licensed link; but we thought we should at least try your product – the GPS inclusion, Auto Everything, the ability to use one radio across the entire 5 GHz spectrum and then seeing the price point made us decide that Mimosa products at least warranted investigation.”

SpringNet1 leveraged the Mimosa B5c products to replace and collocate 4 links in their Springfield, IL service area all in the UNII-1 Band. Before replacement, the links were utilizing Ligowave and Alvarion hardware.

The 3 links were of varying lengths with the shortest being 11 km and the longest at 22 km. Prior to the Mimosa upgrade, the radios were running around 20 Mbps with the fastest link at 70 Mbps. With the Mimosa upgrade, the links were able to leverage the power of Mimosa’s 802.11ac chip and utilizing various channel widths. The links are now running with capacities up to 1495 aggregate PHY. 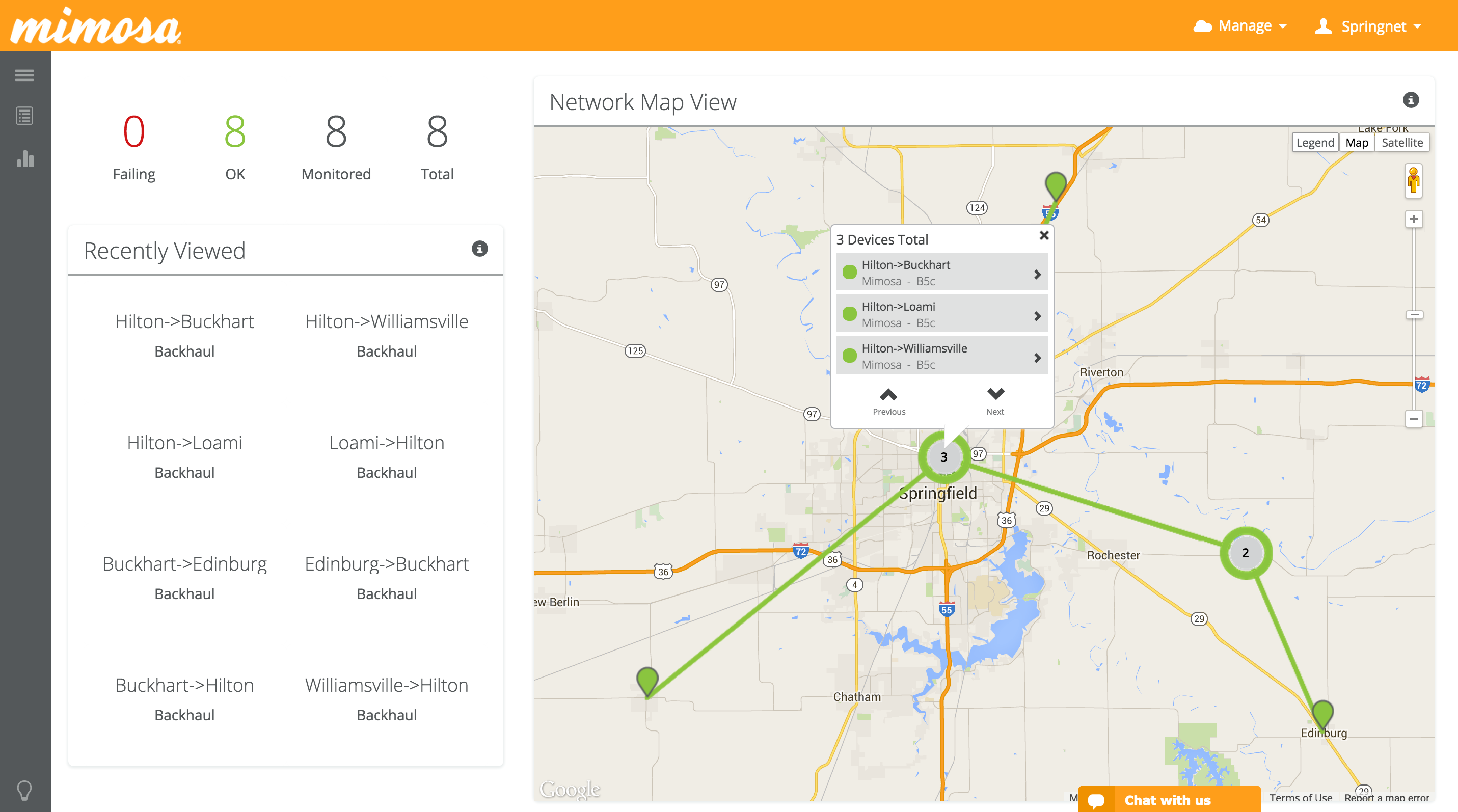 Says Chris Elkin, Senior Engineer of SpringNet1, “One of our locations already had the antennas in place, and we were able to just drop in the Mimosa radio. Watching the link go from 70 Mbps download to 650 Mbps download with just a hardware change was amazing.”

Chris also comments on Mimosa support. “The support experience has been top notch. At first we were wary of the chat function, but then we realized that we can get access to a much higher level of support much faster.

Anthony says, “After our experience with the Mimosa backhauls, we decided to do an exercise where we would each write down the 3 Mimosa features that we think will change the industry.”

“Even though we are a small company, we have to act big, use the best equipment, and find leading products – we believe you will be one of those companies if you continue with what has been a superb beginning.”

Springnet1 is taking its network to the next level. Let Mimosa do the same for your company. The next generation of broadband is here. Contact us for the latest and availability in Mimosa’s backhaul products.