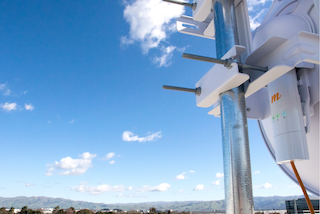 Setting new benchmarks in cost and spectrum efficiency, the C5c is the lowest cost 500+ Mbps radio in the industry for point-to-point (PTP) backhaul links. Service providers can use the C5c to custom-engineer longer distance client links in under-connected areas by using the C5c snap-in mounting feature to connect the radio to the most popular dual polarization antennas. With extended frequency range, radio links can operate from 4.9 GHz to 6.4 GHz, giving the C5c one of the widest operating ranges and the potential to avoid the commonly congested 5 GHz frequencies.

In addition to PTP applications, the compact C5c connects with Mimosa A5c access points in tower-based GigaPoP architectures, enabling massive scaling of subscribers and capacity. Often deployed in rural service provider networks where distances between clients and towers can be very large, the C5c leverages Mimosa’s proprietary Spectrum Reuse Synchronization (SRS) technology and advancements in MU-MIMO and antenna beamforming, to enable powerful scaling, and precise time coordination of transmissions, eliminating the interference caused by other nearby radios. In addition to these long-range point-to-multipoint (PTMP) client connections, the C5c excels in MicroPoP architectures impaired by foliage, for one third of the cost of existing solutions.

Cutting-edge equipment must also be easy to deploy. The mobile Install App was designed in parallel with the Mimosa C5 series to provide all the necessary information for service provider installers to activate and upgrade customer-premises equipment (CPE), facilitating easy and rapid deployment of new subscribers. A handy ‘Aim and Connect’ feature ensures that Mimosa access points and client devices are accurately positioned at the tap of a smartphone screen to deliver immediate connectivity. In three simple steps -- Unlock / Config / Aim -- the Install App cuts the setup and installation time of a C5c to less than 15 minutes, including firmware updates, and streamlines the location selection and final aiming process from a mobile device before a permanent installation is made.

The Mimosa C5c is currently available from distributors worldwide. The new Mimosa Install App will be available for download in June 2017 on both Android and Apple iOS at www.mimosa.co/cloud.