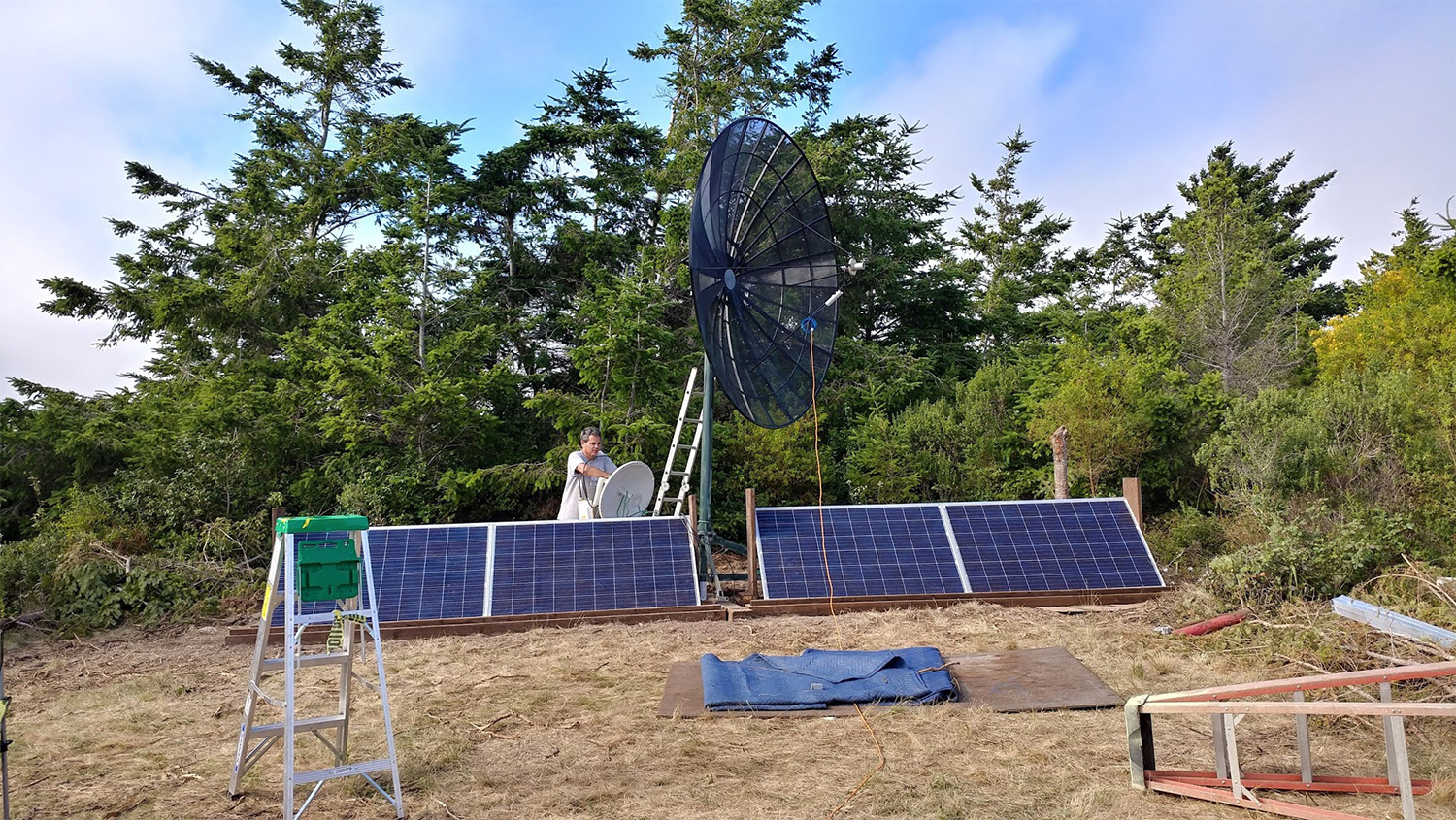 In the first part of our “how-to” series, we wanted to share some tips on how we recently built an over the water, solar relay diversity link from Monterey Bay to Carmel Valley in California. A diversity link is a link that can pick up signals on two different dishes, with feed horns configured exactly 11 feet apart vertically, and is ideally suited to handle thermal inversion deployments. We spent about two months designing the site and trying out several different configurations at the remote site, to determine how to accommodate the long, 56 mile, link. The original plan was to deploy two Mimosa C5c client radios on 10ft dishes at either end of the desired link. We predicted a -43dB once we were aligned. We took into account the ducting of Monterey Bay and believed we were going to be high enough up to escape it.

We spent a day trying to align the dishes but realized we weren't going to get any better than a 3ft dish we had deployed down at the bottom of the hill. We were seeing the same ducting causing dB ranges from -59 to -85, so we deployed a 3ft dish from a different vendor up just to see if our theory was correct. We saw the same dB with the new dish that we had seen with the 10ft dish.

We went back to the drawing board and came up with a plan to deploy two dishes vertically at the Monterey Bay link: a 3ft dish aimed directly at the site and then a 2ft dish aimed about 2 degrees to accommodate the thermal inversion. At this site, we decided to use the Mimosa A5c access point as a point-to-point (PTP) radio as it offers four chains or ports, whereas the C5c will always stay on the better of the two chains. Our A5c product is the only Mimosa product that can be used to create this diversity link – as it has 4 ports, and the dishes use the same channel, you can attach two dishes to the A5c. This is similar to what folks do with RF element horns, except these dishes are the same azimuth, but different vertically by two degrees. The A5c can connect to the C5c 56 miles away and can compensate for ducting events using the secondary dish that is tilted up by 2 degrees. As only two great chains are required, the A5c will switch between the two sets of chains. This will occur when chain 1 and 2 fade or when chain 3 and 4 fade. At the Carmel Valley site where the C5c is deployed, we are using a 10ft C-Band dish, with a six-foot deep concrete foundation. This dish receives dual signals from the remote site and has a 43dBi gain and retails for about $300 dollars. This is about 1/10th of the cost of an industrial-grade dish of the same size. We are using a 90 degree RF elements horn as the feed horn. The horn provides just about optimal “edge taper,” which is -10dBr of the edge to the center. 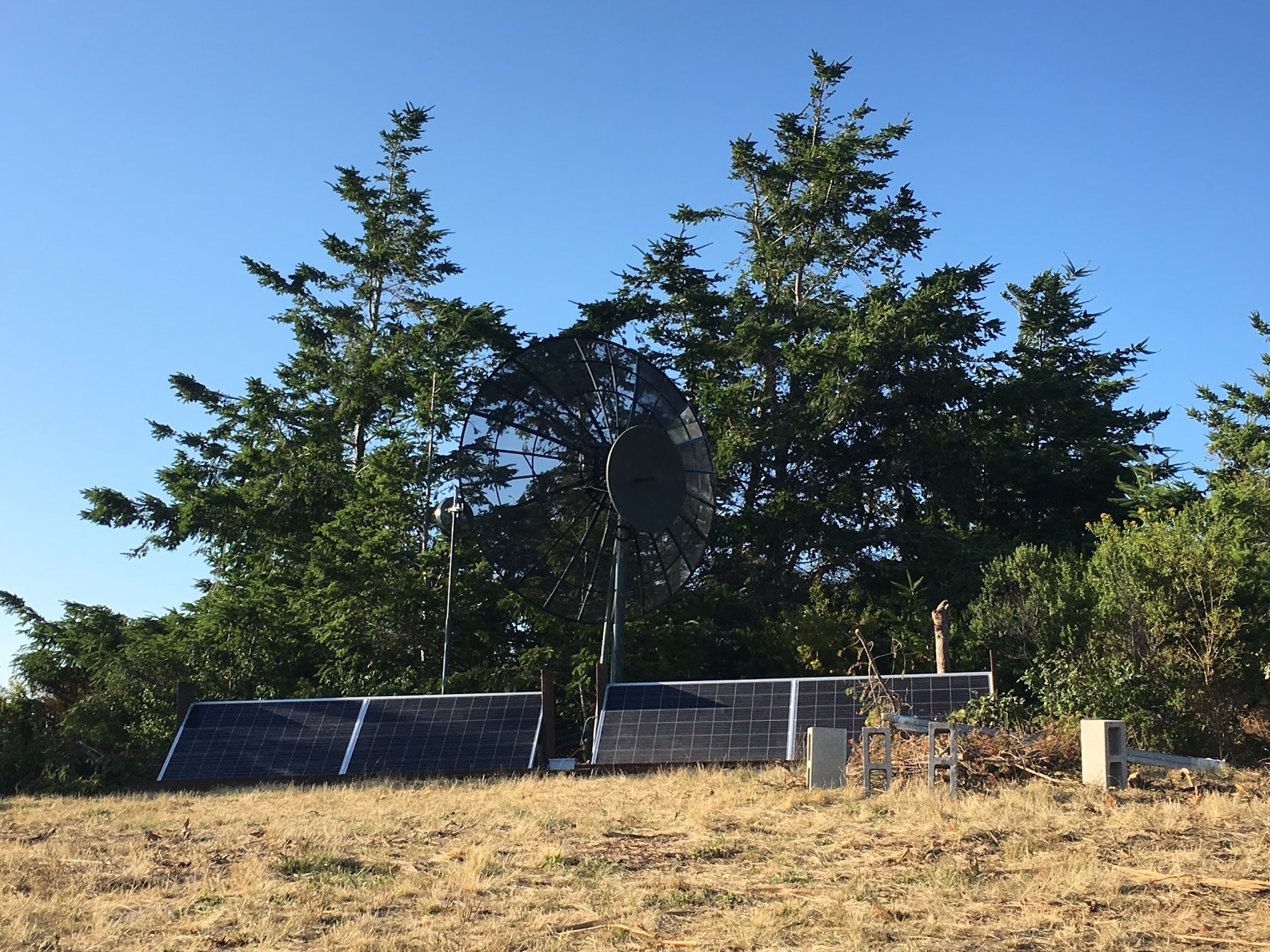 The A5c is functioning in point-to-multipoint (PTMP) mode. We did some minor tweaks to the firmware that adjusted the ACK timeouts mainly. Currently, the max distance on the A5c is 90km and we came in just below that.

As for the spacing of the dishes, we had some fancy math to help us out on that. Mimosa’s CEO and co-founder (and all-round super smart guy) Brian Hinman, did some research and came up with the exact math for the dish spacing. This spacing was based on the center of the feed horns of both dishes.

You can view photos from beginning to end of our deployment and testing in our Mimosa's Facebook Album and view a short video to explain the deployment:

The technical details are:

Please note: Mimosa devices with external surfaces that have been painted, labeled, or otherwise modified from the original shipping condition are out of warranty (http://mimosa.co/legal/warrant... )